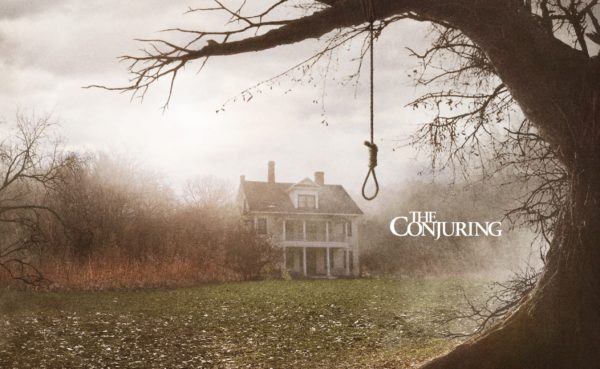 Have you ever had a particularly good steak at a barbecue or a friend’s house? Nothing you would pay top dollar for, but is still good enough to remind you that you should go to the grocery store and start cooking for yourself for once instead of ordering out all the time. After all, you are a grown adult and chicken nuggets are no longer an adequate meal.

That is basically The Conjuring in a nutshell. A solid, well rounded experience that, while offering nothing new, does everything it is supposed to do so well that you cannot help but enjoy it.

The 2013 film was directed by James Wan of the original Saw back when the series could be called “good horror” before it degraded into a childish gore fest that makes Mortal Kombat seem quaint by comparison.

The Conjuring tells the tried and true story of a family who moves into a new home that – surprise! – is infested with a demonic presence. And before they can even unpack, this demon has a bone to pick with their wholesome little bunch. Probably due to everyone’s horrendous fashion sense of drab browns and mustard yellow. That combined with five kids and no internet means that demon is probably going to pull some babysitting duty because lord knows mom and dad cannot be sober all the time.

The film follows the basic horror movie formula: One part moving into a new house that was sold to them by a realtor who, by rights should have their license revoked. Mix in two parents that despite having the means to purchase a 3,000 sq. foot home on a vast section of empty land are struggling with finances and cannot move out. Add one moody teen who never wanted to move in the first place. Finally a dash of lovable dog that won’t enter the house, then is mysteriously murdered and yet no one seems to find any of that out of the ordinary; mix until generic then bake for 120 minutes.

Every single character in the film does all the things that are sure to get them murdered with such alarming regularity that I started to believe they were all in on a bet as to who would bite it first. Maybe when you move into a haunted house everyone is handed a “How to Get Murdered by Ghosts” check list at the door.

Despite the simplicity of the setup, the film is built on a strong foundation of horror staples. The sound is truly outstanding with every creaking door and thumping footstep adding to the immersion as if the audience were physically in the house with them. Wan also adds subtlety to the cinematography with a clever move by shifting the focus of the film between the background and the foreground when something supernatural occurs.

This effect leaves the audience unable to clearly see what is directly in front of their eyes almost as if they too just saw something peering out of the darkness. While the script is a bit weak at times, the acting by Patrick Warren, Vera Farmiga, and Lili Taylor carries those moments with some truly disturbing imagery near the end, as the supernatural elements ratchet up to eleven.

While it played a minor role in the film, it would be remiss of me not to mention the now infamous Annabelle doll. Annabelle is one of the real life examples that allow them to say “based on a true story.” While it is grossly exaggerated compared to the truth, it is effective as far as opening scenes go. For the unaware there is, in fact, a real Annabelle doll that the Warrens had in their possession; a simple Raggedy Ann doll, not the one in the film that looks like it came straight out of Satan’s toy box.

They claimed it was demonically possessed; however, there is little evidence to support that outside of the original owners account and the Warrens themselves. But it never hurts to have a really fucked up looking doll in your marketing for a horror film.

While The Conjuring does nothing different than other great horror movies of the past, it does everything so well that it more than earns a seat in your Netflix queue. The real question is what will the sequel bring? Check out the review for The Conjuring 2 next week.