The practice of combining two, seemingly opposing things in order to make a whole that is greater than the sum of its parts is nothing new. Sweet and sour pork, salt and caramel, fruit and ice cream; etc. That does not mean this practice is fool proof. Simply ask as the creator of the asparagus and grape jelly sandwich. So why do I open with such a seemingly meaningless statement? Because the two games I have been playing the most in recent months could not be more different from each other were they warring families in a Shakespearean tragedy. And yet I find that by playing them in tandem, each enhances the experience of the other, the same way a fine wine complements a meal. The games you ask? Overwatch, a team based multiplayer first person shooter, and Baldur’s Gate a top down fantasy RPG from 1998. And here is where I will stop with the food analogies and promise to no longer write before lunch. 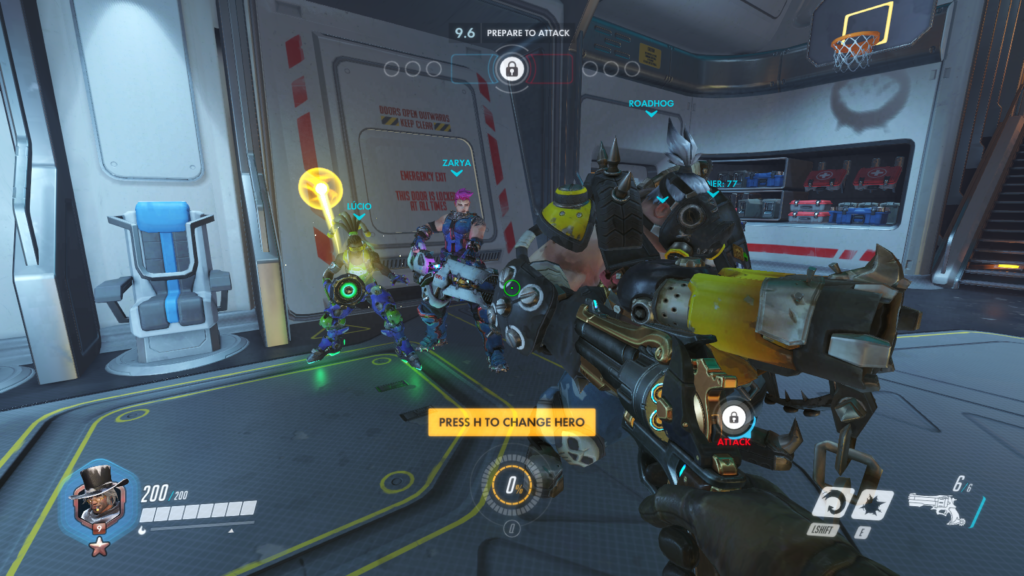 Of the two games, I am certain I do not have to explain what Overwatch is as it recently became more popular than sex as far as Reddit is concerned. But for those of you who have either been living under a rock or, I don’t know say, had actual adult shit to do with your life, Overwatch exploded onto the scene this past summer and quickly became one of the highest grossing and most popular new IPs in recent memory. With its bright visuals, cartoony aesthetic, and high production value, the game offers a simple multiplayer concept that has been polished to a mirror shine. In traditional Blizzard fashion, the makers of Star Craft, Diablo, and the infamous World of Warcraft series, the game has already consumed more man hours than a reasonable sized ecological disaster. Yet despite all it has going for it, there is no single player experience to be found. There is no campaign mode, no character descriptions, no bios or cut scenes save for one that is only accessible the first time you launch the game. While some of this content exists, it is only accessible via the games website or YouTube channel. If your knowledge of the game came solely from your experience playing it, you would think there is nothing to it other than the developers thought these characters and locations looked cool.

On the other end of the spectrum we have Baldur’s Gate. Developed by Bioware in 1998, Baldur’s Gate is a third person top-down Role-playing game set in the fantasy setting of the Forgotten Realms (a.k.a. the Dungeons and Dragons universe). An immediate critical and financial success, Baldur’s Gate was credited with revitalizing the role-playing genre for PC and put BioWare on the map, spearheading a path that would lead them to becoming a beacon of storytelling in the years to come. This mammoth sized game easily clocks in at 45 – 100+ hours of content full of hundreds of characters, dozens of locations, and novels worth of narrative. Until the recently released Enhanced Edition in 2015, the game had no multiplayer element save for a cooperative mode that, until the latest patch, was about as stable as a member of the Kardashian family; that is to say not at all. While some might denounce a nearly twenty year-old game for its dated graphics and archaic gameplay, none can say that it does not provide a well told and compelling narrative. With a rock solid foundation of a good story, dozens of vibrant characters, memorable set pieces, and compelling graphics at the time, it is easy to see how the game captured the imagination of a generation in the late nineties, and how it can still provide an engaging experience today. 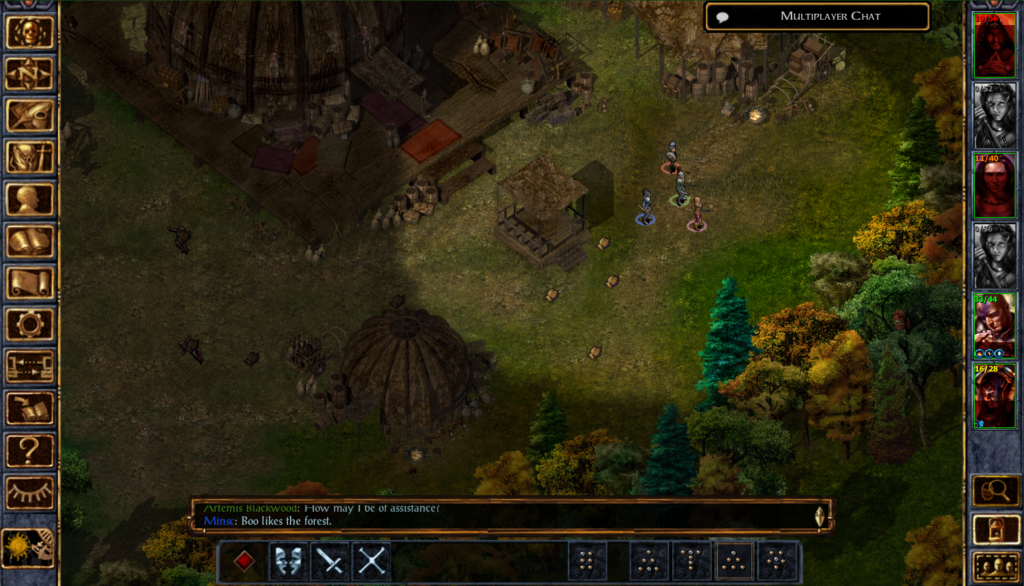 As I sit back and enjoy this distinctly different combination, I cannot help but think that these games are both tree rings in the might oak of gaming history. Both reflect the time in which they are made; from what part of the game was placed as a priority to how they have been sold to the public. For Baldur’s Gate, what was once cutting edge graphics tech can now be created at home by a design student and an hour of Gamemaker. The technology simply wasn’t there. They did not have modern graphic engines that could provide the real time lighting needed to display every grain of dust that sparkles in the high noon sun as it falls onto the shattered corpse of a dozen heroes all slumped over the objective. Instead, that information was all told to us in hundreds of text screens, all of which required a higher reading level than the average middle school student today. Overwatch conversely never so much as surpasses a compound sentence while playing. After every game the game goes into slow motion and there is a condescending “VICTORY/DEFEAT” sign shoved in your face while an orchestra trumpets your stunning victory or laughs at your glorious ineptitude. You know, just in case the last 15 minutes of the opposing team force-feeding you your own nether region was not a clear enough sign that you are about as skilled as a polio riddled goldfish.

Even the way in which the games are sold to us has changed. Originally the practice was to sell a complete product, ready to play the second you finished installing it or popped it into the disk tray. If you liked it enough, maybe the company could convince you to purchase the sequel in a few years that promised to have better graphics, more characters, additional classes, and a unicorn mount after they listened to all your gripes about the severe lack of unicorn gameplay in the first installment. But now? I very much doubt we will ever see Overwatch 2: They’re Still Watching. Why? Because it simply does not fit within the new subscription style business model.

With the advent of the internet, a developer can simply send you an update that can add that oh-so special unicorn in a matter of months instead of years. They can push a graphics update, additional maps and characters, all the pieces of a game coming in drip format through updates. Since the game’s launch, Blizzard has added, a competitive mode, and arcade mode, 2 new characters, 2 new maps, several dozen skins, various balance adjustments, and even complete redesigns of characters. There is no end in sight to the changes coming down the pipeline. Has any of this cost the player anything? Not directly. Instead it has been fueled by the loot box micro transactions, a system that was universally reviled when it first started to spread like a cancer in the late 2000s, yet seems to be a standard practice today. While not the worst implementation of microtransactions, (Blizzard has even gone so far as to listen to consumer feedback on ways to improve them) they still exist in this well-loved game. Even as I cry foul, I myself have spent money in this system. With no storyline and constant updates and changes coming, why would they feel the need to dedicate time and money for a completely new installment when the only changes it could possibly have could simply be pushed in an update to the current game for a fraction of the cost? 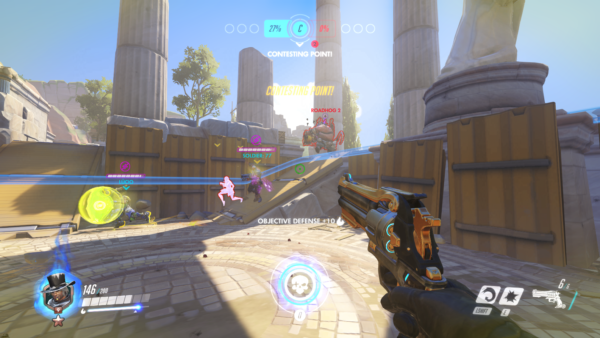 This is not me getting on a pedestal and trumpeting my opinions as law. I am simply looking at the history of where we came from and where we are now. It is interesting to see what practices work and what we spend our money on today compared to just a few years ago. Baldur’s Gate had to tell a rich and engaging story and provide hours of fresh content in a single installment that they had to get exactly right the first time. There were no emergency updates. No day one patches. If the game didn’t work exactly as intended when it shipped, it was doomed. Meanwhile Overwatch had to find a formula that was both simple and addictive, and they put an incredible amount of effort into making it look nice. As a result, they sacrificed the storytelling and pushed what little there is off to other mediums. In truth, these are the days where anyone who is curious enough about the story can take their time to find it in other places. It is just not a priority for the game they wanted to make.

While Overwatch and Baldur’s Gate are two completely different experiences trying to do completely different things, there is still something that can be learned by comparing the two of them. How they were sold, as well as where the time and budget was spent can tell us about the future of gaming and generates a lot of questions. Will sequels one day be a thing of the past? Will that only be for multiplayer experiences? And who the fuck first thought of putting peanut butter and jelly together?