Recently, I found myself in the odd position of having a free weekend with no responsibilities or work commitments. This situation was frightening and unnatural for me so I was quick to remedy it, resulting in my excursion to the Game On Expo in Mesa, Arizona.

Arizona, being as welcoming in the summer as a deranged hyena, is not usually on the cross country list of stops for anything, so an actual game expo showing up was a welcome surprise.

Co-founded by popular YouTube celebrity John “Gamester 81” Lester, the expo was part video games, part tabletop and card games, and part gaming YouTuber convention as the line-up of guests was 90% YouTube personalities and 10% voice actors. It was rather obvious from the onset that the expo was only in its second year as it certainly felt more “underground” for lack of a better term.

The first clue to this was the well-mannered workers behind the registration desk. Traditionally, this is a position held only for the morbidly bitter and depressed who are approaching their late 60’s, or the recently lobotomized; so you can imagine my excitement at not only their welcoming visage, but the surprising display of competence as well. 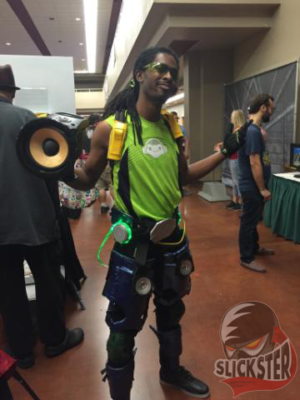 My first stop was the vendor hall, because like any good nerd I was determined to spend what little money I had on unnecessary collector’s editions of games I already own as well as various baubles simply because they were in the shape of Master Chief.

There was a surprising amount of stuff to rifle through; crate after crate of games varying from current generation installments all the way to the NES as well as a few classics that must have been found buried alongside the Ark of the Covenant for how fucking expensive they were.

When a copy of Earthbound is within spitting distance of my mortgage payment, that is when I know to move on to the next booth. But while there were a few expensive stops along the way, there was plenty of treasures to be found and some great deals from some of the local vendors, once again giving off that particular “underground” smell.

Not to say that is a bad thing; while there were certainly a fair number of people at the convention center, it was never comparable to sitting in the middle of L.A. traffic unlike so many of the larger conventions that have become bloated and unwieldy in recent years.

There was never a fight for a seat at a panel, nor hour long waits for the chance to get an autograph or photo. Surprisingly, nearly every panel host went into the hall and spoke with anyone who wished to talk to them after their panel, making the entire event feel far more personal than the larger conventions.

Showing that not all of the celebrities we follow want nothing to do with us and instead that most of them are surprisingly nice was another point in its favor. Giving fans the chance to speak one on one with personalities such as Johnny Millennium a.k.a. The Happy Console Gamer and AlphaOmegaSin (who, in spite his sailor mouth and self-described “criminal” appearance, was actually quite personable) certainly added to the experience, bringing people together under a shared passion and was well worth the relatively short wait

Despite only being in its second year, Game On Expo is a well-organized and enjoyable convention that shows some true promise for the years to come. Lovingly crafted by those who truly care about and respect both games and gamers of all walks of life, I was surprised to find it as enjoyable as I did. And if I can find something to like about it, then anyone in Arizona who loves games owes it to themselves to check it out next year.